Jump to text about City Poems >> 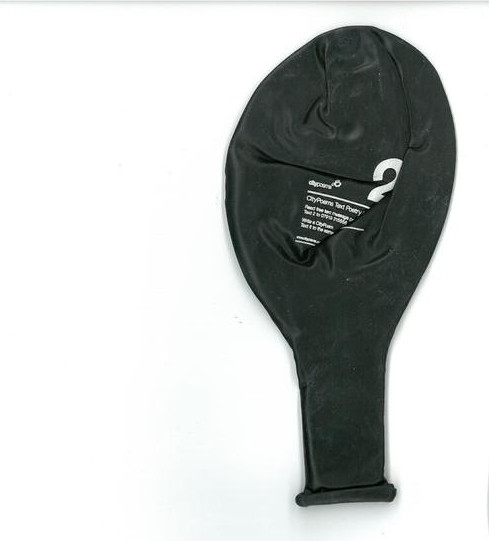 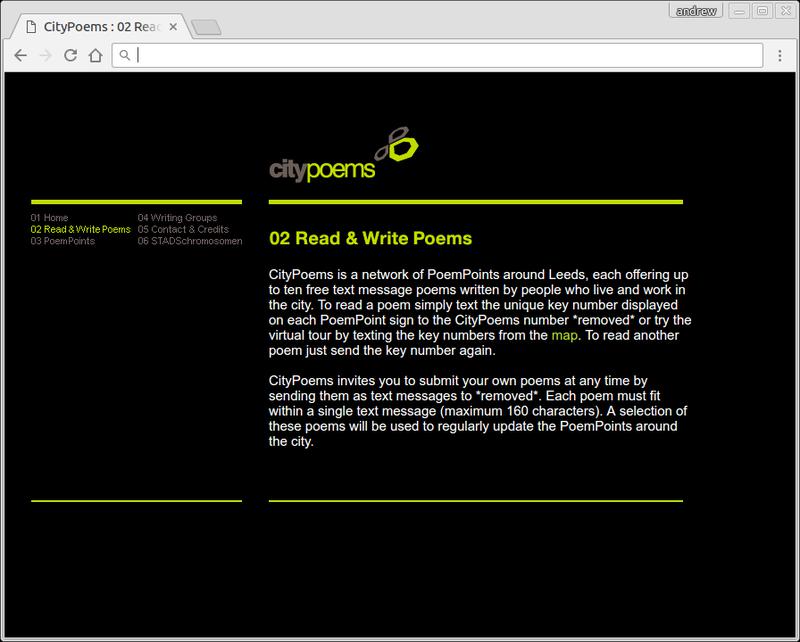 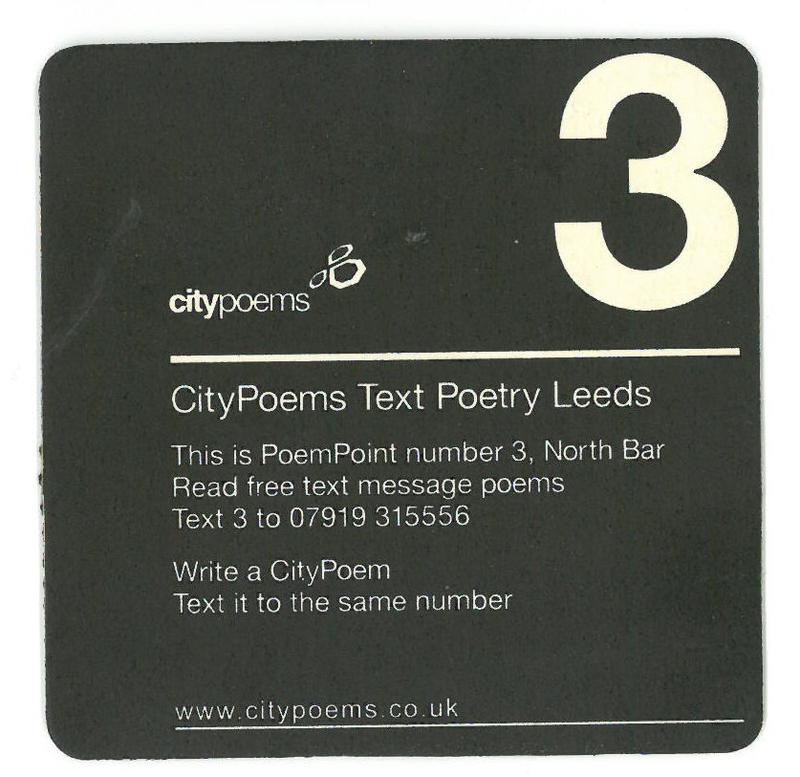 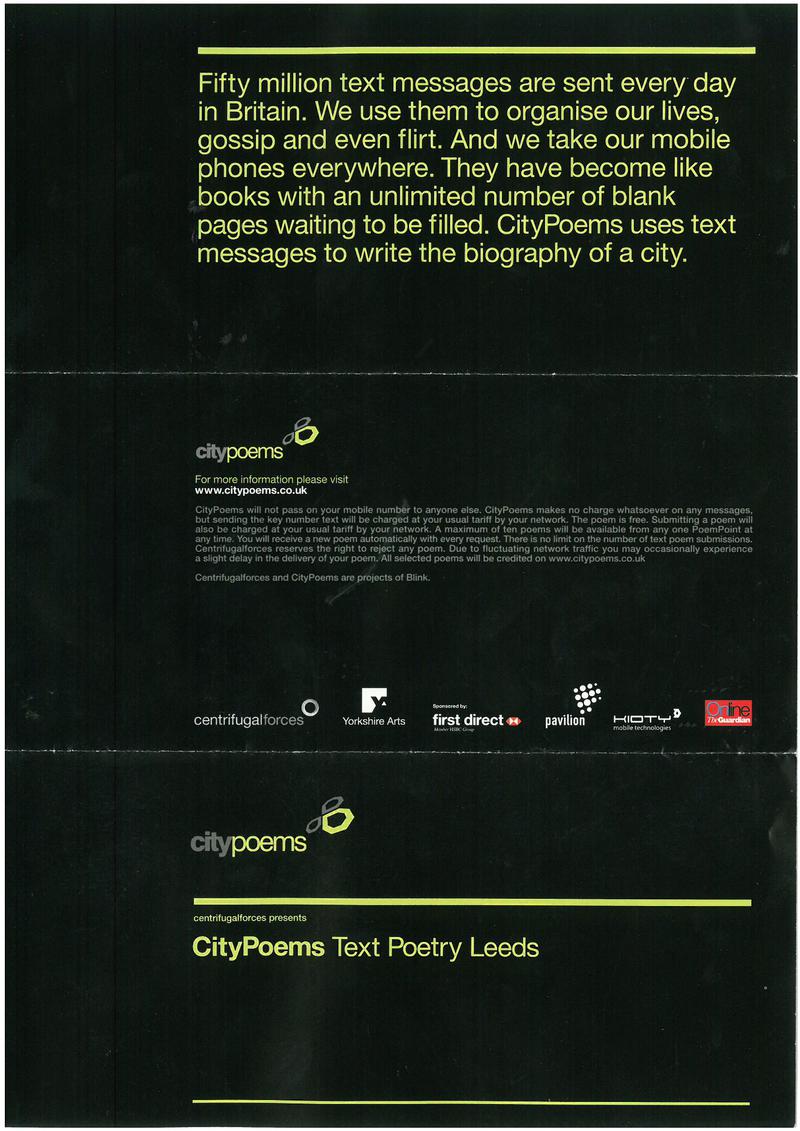 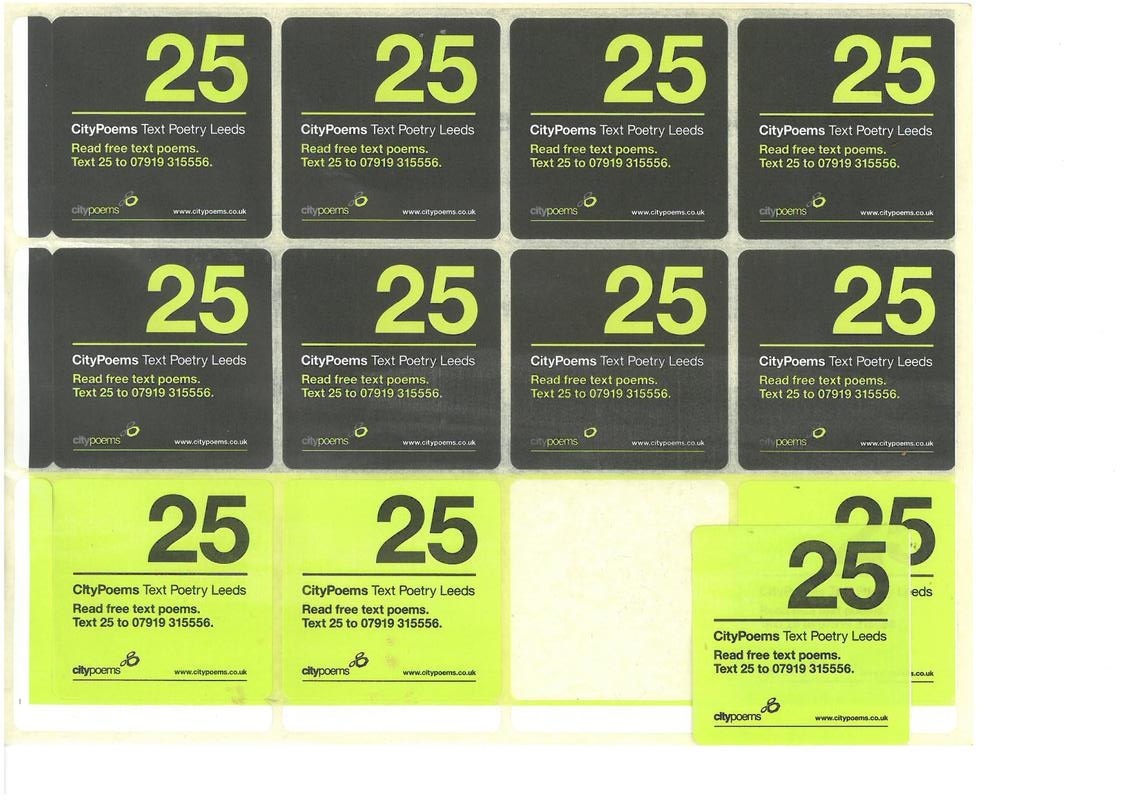 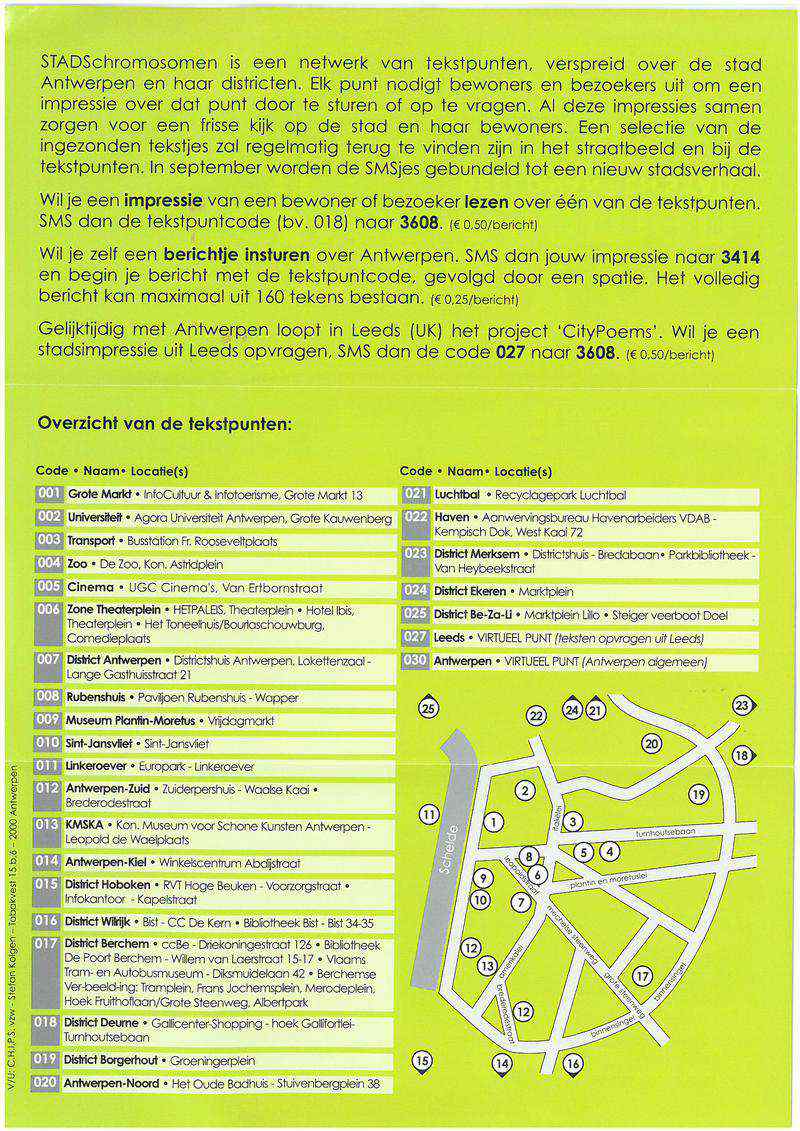 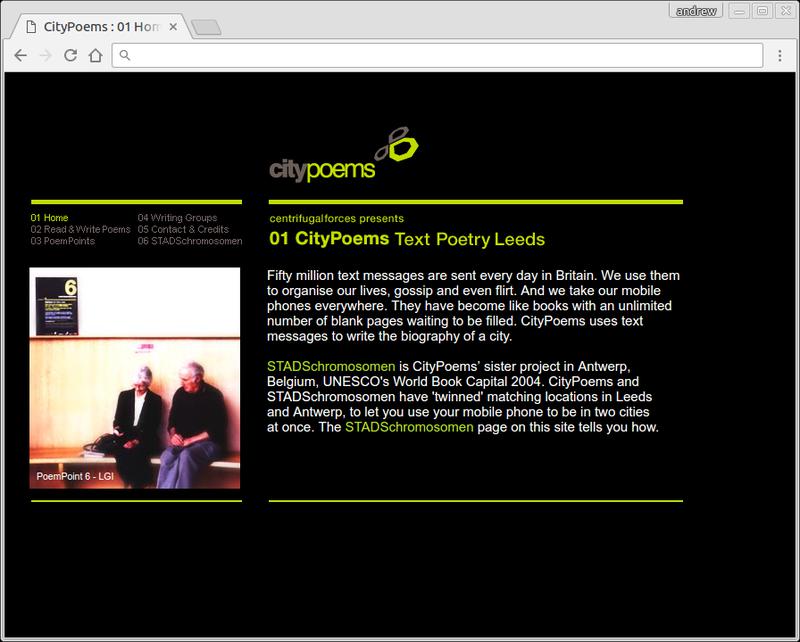 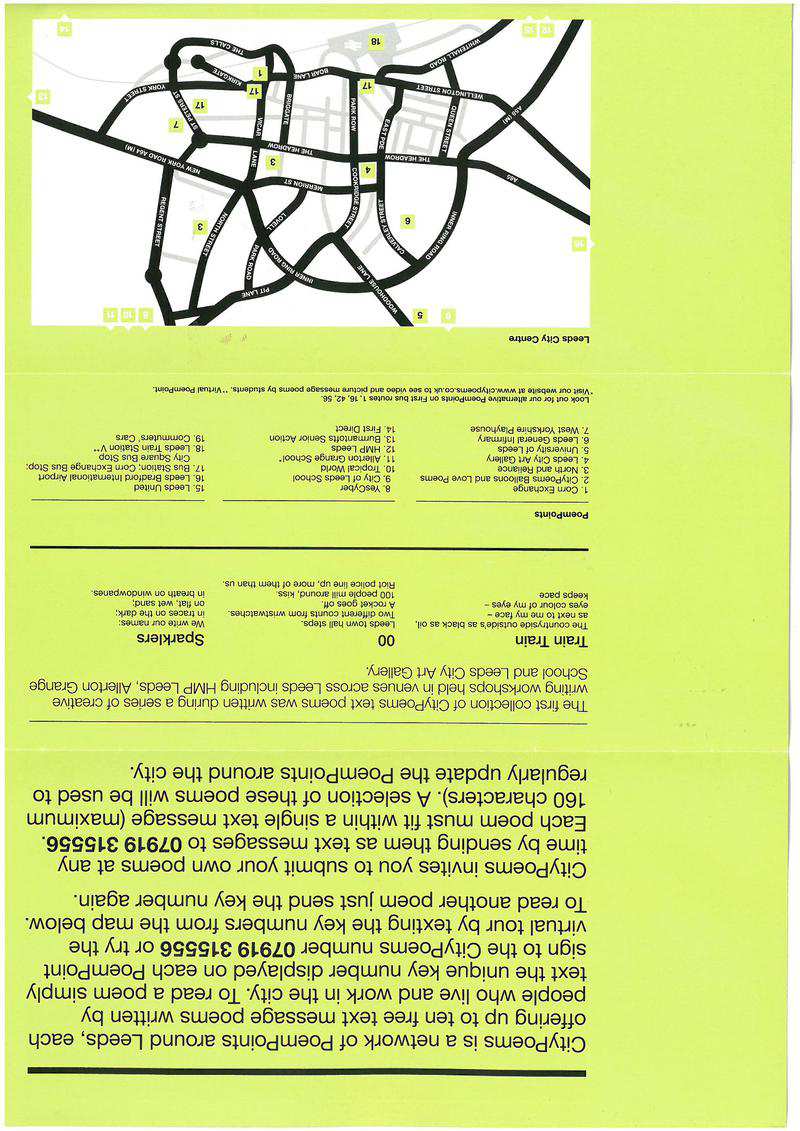 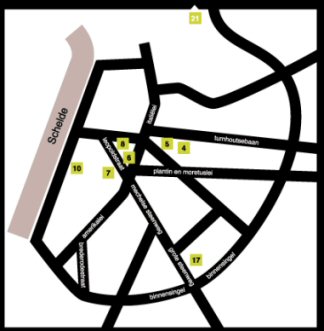 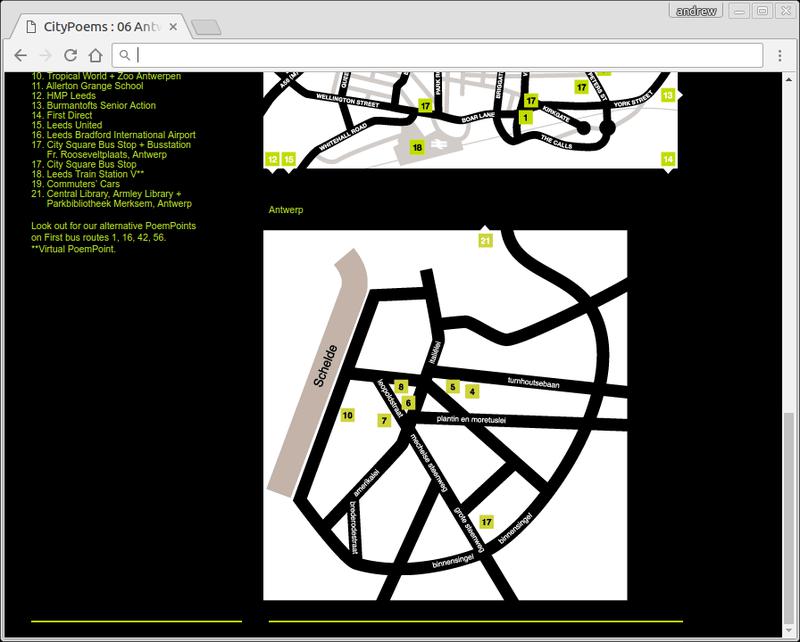 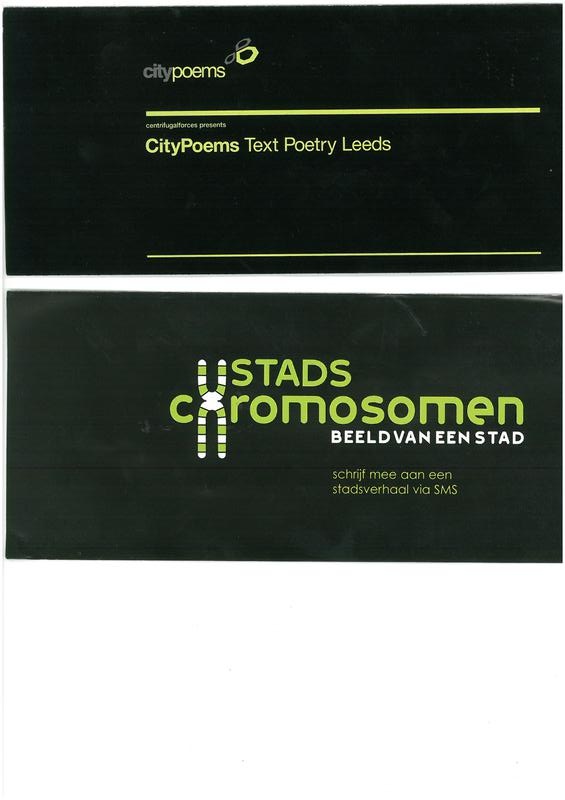 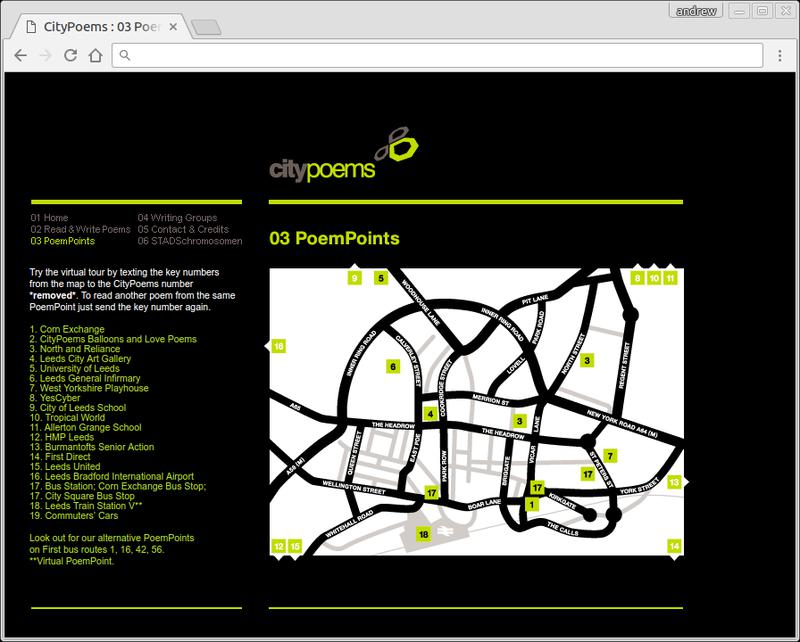 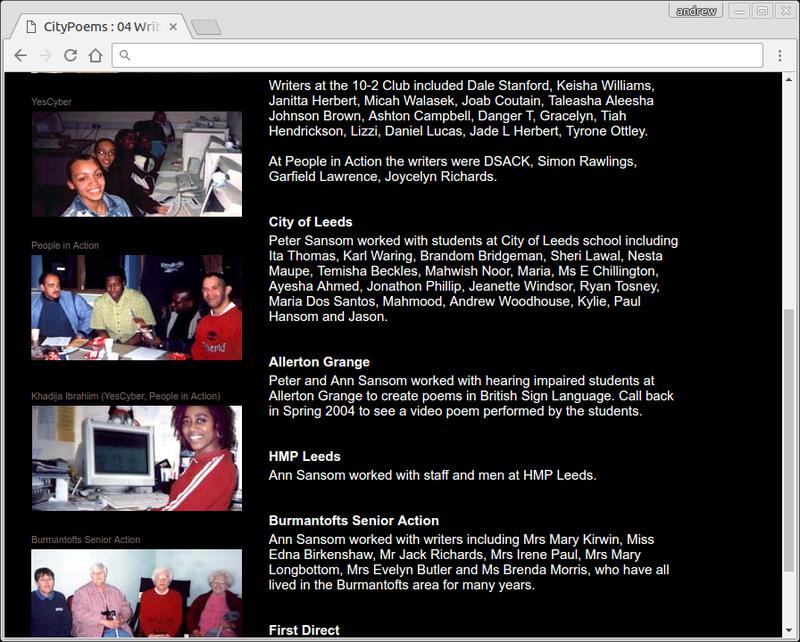 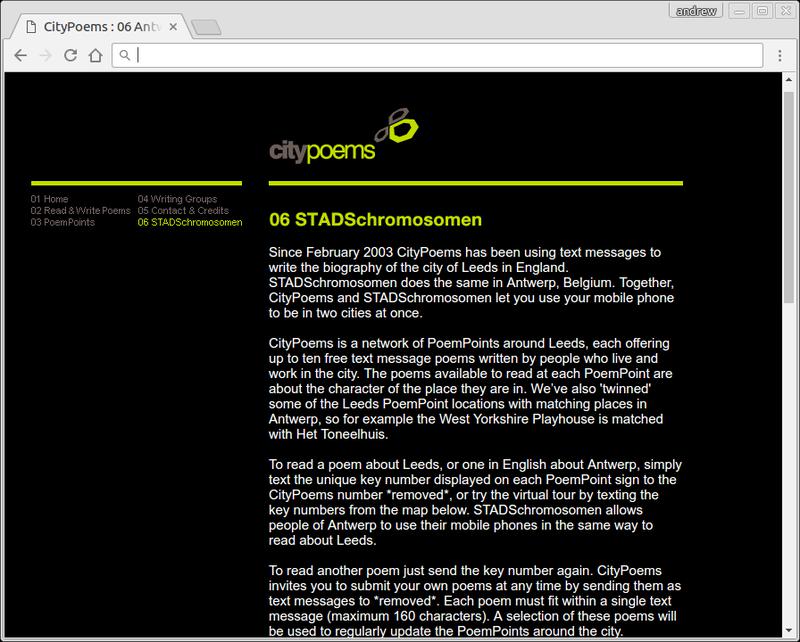 A book that you read by walking round a city.

City Poems was a text message biography of the city of Leeds, written by the people who live and work there and delivered from a network of Poem Points at key locations around the city.

Poems were read more than 3000 times by text message, and 400 were submitted.

The Poem Point locations were chosen to tell the story of the city through its places, and City Poems was a book that people read on their mobile phones, finding new chapters as they walked around the city, and reading them in the place they were written about.

A Poem Point sounds quite technical, but actually it is just a sign on the wall with some instructions on and a key number.

Send a text with just the key number in and you'll get a poem back about the place you are in.

For example, Poem Point 3 is a bar, so if you sent "3" as a text you'd get back a poem about being drunk, or hoping to meet someone, or hoping to avoid someone or regretting the night before. 6 is Leeds General Infirmary so there you'd get back a poem about care or grief or something that fits in with the location. If you send the key number again you get another poem.

To get the first poems for City Poems we set up some creative writing workshops at some of the Poem Point locations, run by Peter and Ann Sansom, but after that anyone who wanted to could send in a poem just by texting it to the same mobile phone number and I would guess where it was about and add it to the system.

In 2004 Antwerp in Belgium was the World Book Capital, and Stefan Kolgen and Ann Laenen set up a sister project to City Poems called STADSchromosomen (City Chromosomes), so we twinned Leeds and Antwerp by choosing the same sort of places in Leeds and Antwerp, for example the civic theatre, and in Leeds you could read poems from Antwerp about plays and performance and at the theatre in Antwerp you could read poems from Leeds on the same subject.

City Poems was about people making their own sense of shared public spaces by reading and writing while in those spaces - readers might never find out who wrote the poem they read at the bus stop, but they knew that there was some common ground because they shared at least one of the same places.

The new knowledge from doing City Poems led onto all sorts of things including Where Were You Happiest to Arrive, The Secret Life of Cumbria and especially Thumbprint.

Thumbprint is a platform for prototyping, developing and sustaining socially valuable uses of mobile messaging. It has been used in all sorts of contexts well outside of what we would understand as "the arts" including a council mental health service, a tenants and residents association, a drug and alcohol treatment agency , a local councillor to consult people about a budget and many more.

The website was built by Simon Mackie, who also designed and built the Centrifugalforces and Onesixty sites.