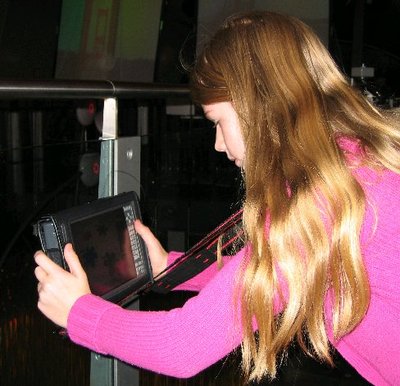 Use a magic mirror to find and set free Genies trapped in objects around a building.

Genie allowed children visiting the Magna Science Adventure Centre to find and set free Genies trapped in objects around the building by Mardi, an evil wizard.

To free the Genies, children used a Magic Mirror, created by Magna the Magnificent.

The Genie is an RFID tag, and the Magic Mirror is a tablet PC with an RFID reader.

As well as trapping the Genies, Mardi stole their stories and memories.

Magna has built the Magic Mirrors and put signs where each of the Genies has been trapped, but not even he is powerful enough to give them new stories.

Only the imagination of young people can do that.

The Genie talks to the child through words on the Magic Mirror, and asks questions about itself and its world. These questions are the missing memories that Mardi stole.

The child answers by writing and drawing on the Magic Mirror, and so gives the Genie new memories and a new shape.

"he eats clouds and drinks rain. which makes him quite clean and he often breaks wind that don't smell"

(the one above is my favourite)

"Battle was in the north castle lots of people came to the castle and killed him He could not do anything at all." [written by a 5 year old boy]

"The formal assessment of Genie focused on how it measured up against “learning outcomes” for a school visit.

That was a straightforward place to start and the results were very positive, though based on a small sample over only two days.

But next time I’d also like to gauge it a little bit more on its own terms, in the way that I’d understand the success of a book for example.

Was it really using a magic mirror to free trapped Genies, and does writing a story bring them to life?

It was that idea that stories are real and have a life (and are what we use to give things value), and that if everything has a story, then everything is alive, that struck me about RFID in the first place."