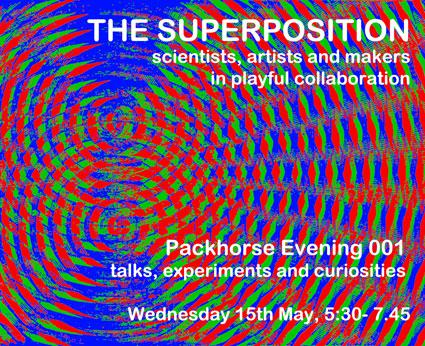 I was a co-founder and main organiser of Superposition, a network and space for collaboration between artists, scientists and makers in West Yorkshire.

Active from spring 2013 Superposition is a self-organising network of artists, scientists, and makers and was one of the most productive and connected such groups in the North of England.

Superposition curated 10 public talks events in which an artist, a scientist and a maker presented their work. The events have included artists, musicians, visual artists, creative technologists, scientists from physics, biology, maths, computer science and chemistry, and makers ranging from the digital - both software development and hardware hacking - to textile design and crafting.

I was one of the founders of Superposition and ASMbly, an incubator for new collaborations and new work, and I initiated and managed a substantial part of the activities of both, including:

bioASMbly an evening of talks and hands-on workshop activities with a focus on biology, which took place at the first Superposition ASMbly;

the bioLeeds group, a group of people interested in art, design, and making with biology;

the sandpit process, a carefully considered structure to generate ideas and new collaborations between artists, scientists and makers;

Superposition Pale Ale the first collaboration with a scientist other than one of the founder members that happened at ASMbly.

I structured and managed the first Art, Science, Maker Commission, a £2000 commission for an artist, craftsperson or cross-disciplinary group to create a new work in response to Paul Beales' and Barbara Ciani's research on compartmentalisation in biology. I put the time into making sure it happened properly because it was a test case for a way of funding artists and makers that I developed with some of the scientists involved in Superposition. This way of funding artists was then successful twice more.

I was an active participant in three of the collaborations that formed from the sandpit process, Textile Proteins, Archibio and The Glass Goes Where It Likes To Be.

Almost all of the active participants in the first four years of Superposition other than the original founders had their introduction to Superposition through an invitation from me to one of the activities I initiated and organised.

One of the main parts of the structure of the ASMbly events was derived from the bioASMbly, bioLeeds and sandpit activity, through my organising of hands on workshops both for public engagement and also as a way of sharing knowledge and opportunities for collaboration between participants from different disciplines. This is an approach I'm continuing to build on.

I also, of course, did general project management activity for Superposition, ASMbly and the other work listed above, including press releases, social media, mailing lists, events organisation, timetabling and so on.