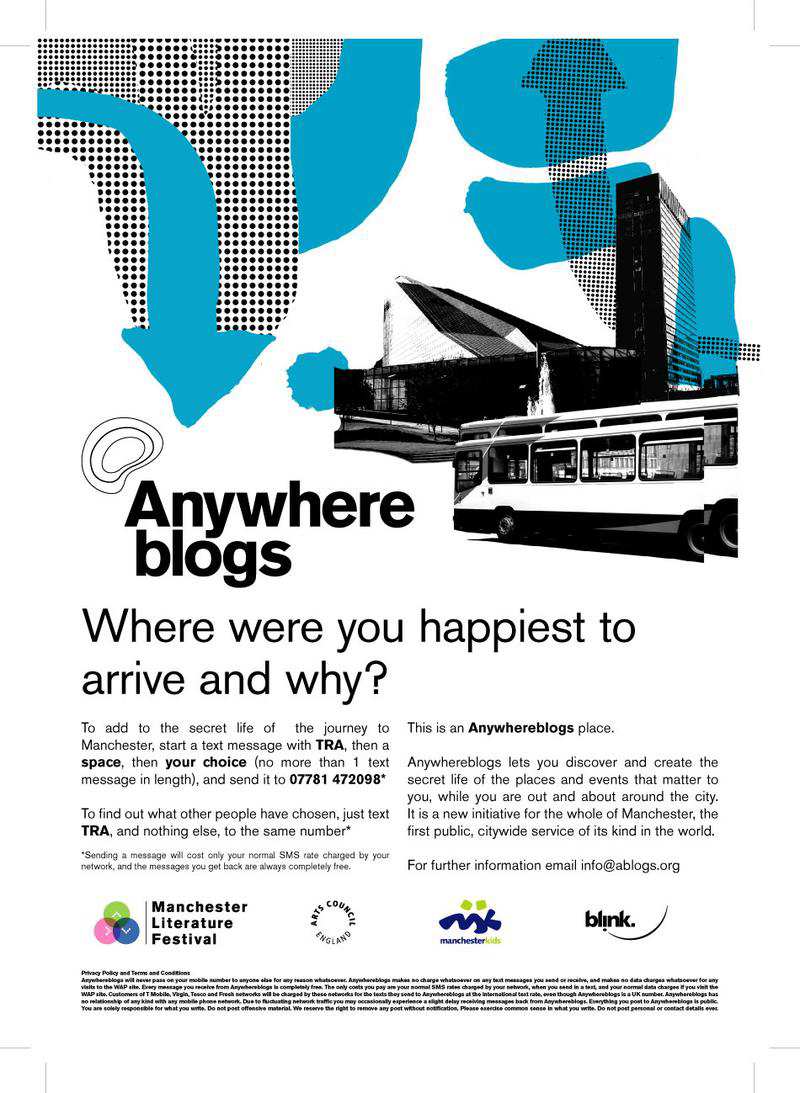 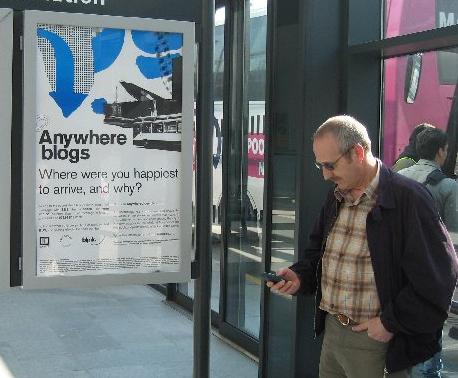 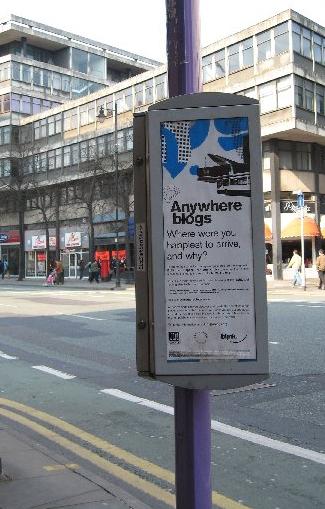 ﻿Posters at bus stops in Manchester that people could respond to by text message.

The posters asked people to share their answer to the question “Where were you happiest to arrive and why?” by text message, and to read other people's answers, again by text.

There was an amazing range of things sent in, recording moments in people's lives that were everything from sunny to devastating.

"piccadilly is my best, because i found the love of my life there. Ten years strong. By jim of salford."
"At ashton new road waiting for a bus to take me home from another one night stand!"
"Im lonely need company"
"the 8 to bolton every tuesday night for a couple of pints with the lads to break the working week. Can't beat it! "
"Happiest to arrive back at the hospital the morning after my little girl had been born :-) "
"arriving at stepping hill hospital after childline stopped my son from killing himself "
"getting the bus to the hospital in time to see my brother before he died he was only 19 "
"rail replacement from stockport to sheffield the peaks are gorgeous today in the sunshine "
"The 375 terminus at Shiloh Road - it has to be Manchester's loneliest bus terminus, with sweeping moorland views "

And this little bit of Zen philosphy:

"I am always happiest to arrive somewhere when i am late and it turns out that everyone else is late as well, especially on a sunny day!"

It was the depth and honesty of these messages, which were just sent off into the air anonymously, which started to get me thinking about how connections by messaging, even with organisations rather than personal friends, could be good for people's state of mind.

This led on to lots of applications of Thumbprint for health and wellbeing.

It started to be clear as well that there is a qualitative difference between what people get from messaging and from social media.

The same Where Were You Happiest to Arrive approach was rediscovered in a later project called Hello Lampost, by a design agency called PAN Studio.

This is Hello Lampost at a bus stop, with Where Were You Happiest to Arrive images for reference.

The description of the project

"Hello Lamp Post is an interactive system that gives everyone in Bristol a new tool to talk with each other, through prompts and questions"

is quite reminiscent of Where Were You Happiest to Arrive (2007), Manchester Literature Festival Anywhereblogs (2006), Secret Life Of Cumbria (2008).

and the "inspiration" the designers describe

"The inspiration for Hello Lamp Post came about by combining two ideas. The first was that the city can be thought of as a diary that one walks through"

What is clever about Hello Lampost is using the identifier codes on street furniture. That's nice.